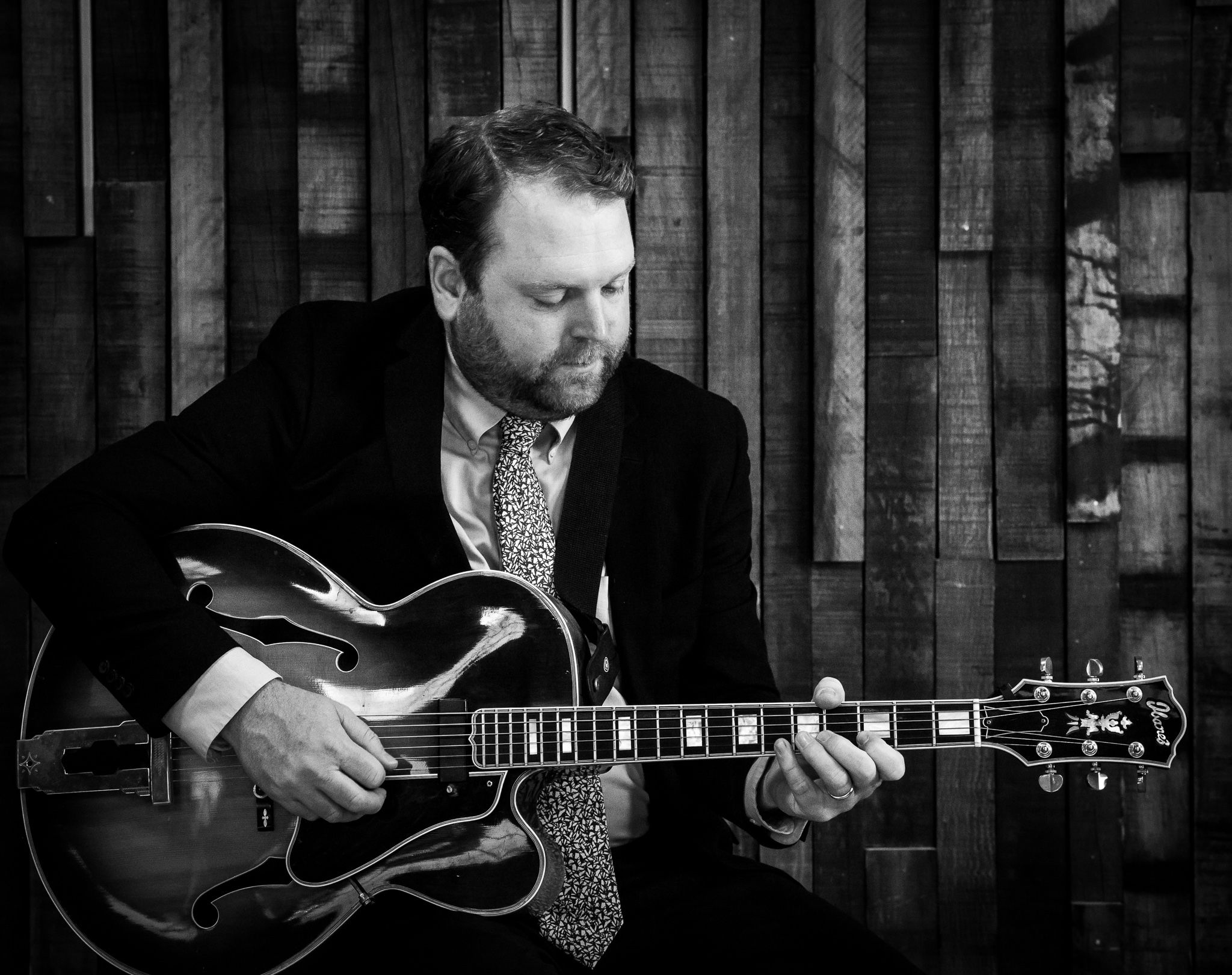 (PORTLAND, OR)—Portland Jazz Composers Ensemble (PJCE) is delighted to announce the appointment of Ryan Meagher as its new Artistic Director. Meagher (pronounced Marr) is an established guitarist in Portland’s jazz community and is also known for his roles as a co-founder and Programming Director of Montavilla Jazz, PJCE’s Director of Operations and Director of PJCE Records, an editor of Jazzscene Magazine, as well as in his role as an educator with Mt Hood Community College, University of Portland, Lower Columbia College, and with Metropolitan Youth Symphony. His work in this new role at PJCE begins immediately.

Meagher succeeds Douglas Detrick who served as both the Executive Director and Artistic Director 2013–2022, leading PJCE’s production of more ambitious, culturally-relevant programming, raising the profile of the organization, and building a more diverse coalition of partners.

Meagher shares, “I am incredibly honored to continue down the path Douglas Detrick, Andrew Oliver, and the rest of our founders laid for PJCE, and I am excited to expand PJCE’s reach. Since I arrived in Portland ten years ago, I have only been focused on one thing, and that is deepening the impact of the jazz scene. You can expect us to carry on our mission of creating and performing original jazz music that engages and supports our community’s diverse artists, cultures, and places. But you can also expect to see and hear that mission realized in new ways. We will be putting out new music in live performances and recordings, widening our educational outreach, and creating opportunities for more people to feel truly invested in our work. Celebrating original music by jazz and improvising musicians is all I have cared about since I can remember, and I know that this little thread in the cultural fabric of our fair city is going to shine brightly for years to come.”

Meagher is a graduate of the University of Nevada at Reno who has lived in Portland since 2012. He will continue in his educational roles as well as his work as an individual artist and stewarding the PJCE Records label.
Executive Director Meg Morrow remarks, "Having Ryan step into this new role with PJCE is very exciting for our future. With his deep connection to the Portland Jazz scene, and his dedication to amplifying Portland musicians through his work with Montavilla Jazz fest, PJCE Records, and his own creative productions, it is a perfect fit! Ryan will be integral in continuing our mission to support new works in jazz in our city and help bring those works to wider audiences. He has played an essential part in PJCE's trajectory as Director of Operations, and as Artistic Director he will bring his wide knowledge of the craft and his expertise in the genre to create engaging performances and connections within our vibrant community."

Portland Jazz Composers Ensemble is a nonprofit organization whose mission is to create original jazz music that engages and supports our community’s diverse artists, cultures, and places. In operation since 2008, PJCE is the only organization dedicated to commissioning and performing original music by Portland musicians, building a broad audience through unique, collaborative, and community-oriented programming that builds bridges between communities in this vibrant city. Learn more at http://pjce.org.

Ryan Meagher (pronounced Marr) is a jazz guitarist and composer who grew up in San Jose, California. Perhaps best known for his compositional acumen, he is also well-known for his flexibility and range. He is truly in his own space when exploring his thought-provoking original material with exciting and sensitive sidemen, but he has also accompanied a pool of incredibly diverse artists. He can lay down traditional harmonic and rhythmic frameworks for artists like Terell Stafford and Randy Brecker, and John Clayton. But he can also stretch and provide color as he has alongside very adventurous artists like trumpeters Cuong Vu and Taylor Ho Bynum, bassist David Friesen, and the poll-winning ensemble Mostly Other People Do the Killing.
It was during the period that he lived in New York City when launched his debut album Sun Resounding announcing his arrival on the modern jazz scene. Shortly after the success of his second album entitled Atroefy on Fresh Sound New Talent Records he attended the University of Nevada, Reno (UNR) to attain his master of music degree in pursuit of a career in jazz education. His third album Tone was recorded in NYC in between his studies at UNR, and it received international critical acclaim. After the completion of his master of music degree, Meagher relocated to Portland, Oregon where he quickly became a recognizable force in the creative music community there. Along with releasing his fourth record Tango In the City of Roses on PJCE Records he has been instrumental in expanding the scene. He has been working closely with the Portland Jazz Composers Ensemble since 2013 as the Director of Operations and the Director of PJCE Records since 2015. He is also a co-founder and the Programming Director of the Montavilla Jazz Festival. He was previously Editor of the Jazzscene Magazine, and currently teaches at Mt Hood Community College, University of Portland, and directs the jazz program at Lower Columbia College in Longview, WA. He has a total of eight albums as a leader, has been a sideman on many more, and is set to release a multidisciplinary work with a visual artist in 2023.
Copyright 2022 Lower Columbia College | All Rights Reserved.