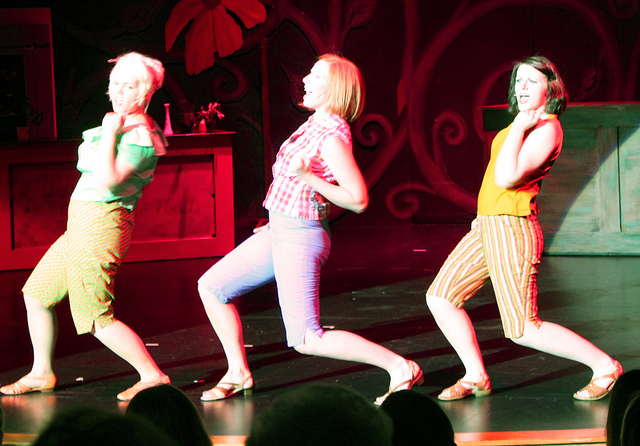 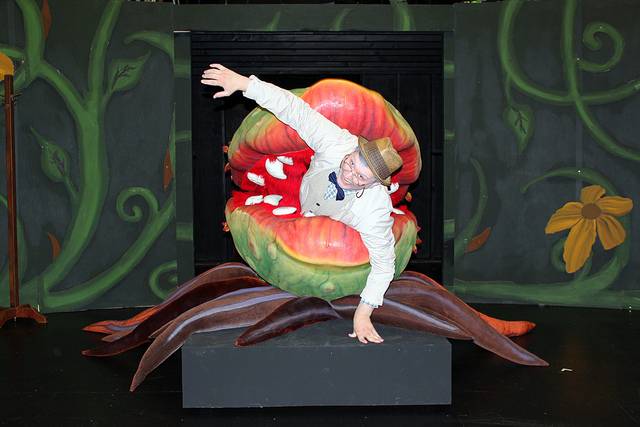 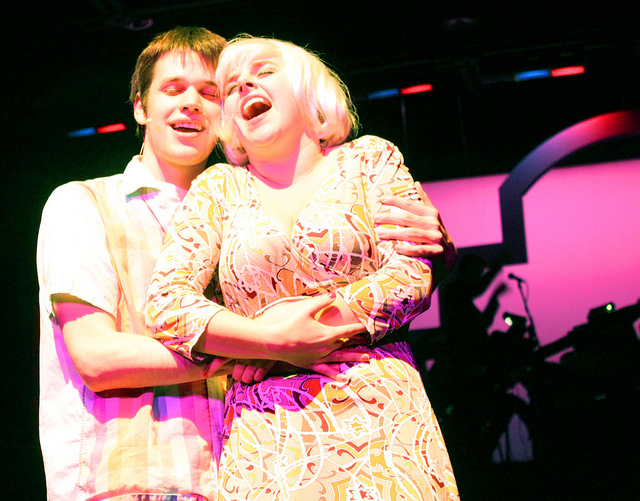 ACT (Actors, Clowns, Technicians) One Drama Club is the oldest club on campus!

Act One includes everyone involved in drama at the college. Members are actively involved in producing a Center Stage Theater production each quarter.

Robert Cochran, Technical Director, has held the role of technical director of the Rose Center for the Arts since its opening in 2008. He also serves as the instructor of the stage crafts class for the drama program. A Kelso native, Robert graduated from LCC then transferred to the University of Washington School of Drama. He has worked as a scenic and Lighting Designer and served in a multitude of backstage roles including Technical Director at Arts West, Lakeside, Mercer Island High, and Okoboji Summer Theatre at Stevens College. In his free time he enjoys biking, kayaking, making ice cream, and flying.

Akitora Ishii, Director of Photography and Film Editor ~ The Story of the Tattoo, Club Greg and Runners Telephone is a proud alumnus of Lower Columbia College and Center Stage Theater. He graduated from LCC in 2017 and continued to study Theater and Film at Portland State University, completing his bachelor’s degree in Theater Arts in June of 2020. His most recent work was as Michael/The Wolf in PSU's production of Wolves Eat Elk, and as Assistant Director for PSU STAGE's production of The Language Archive. He is thrilled to work with Betsy and Robert again in a new capacity, and hopes you enjoy our exploration of storytelling mediums in the current situation.

Casey Halleck (2020-21 Stage Manager and author of Club Greg and Runners Telephone) is an aspiring playwright who has had two of her scripts produced as films this year.  She is mother to 15-year-old Gustober Jombes and two-year-old Tony Nominated Tveit (a yorkie and a cat respectively). They are the light of her life.  Casey is a 2020-21 Reiniger Drama Scholarship Award Recipient.

Ryan Mielcarek (Boom Operator for Runners Telephone, and Frank Butley in Native Gardens) is enjoying his continued studies at LCC and his 4th Center Stage Production, this time behind the scenes working in film production.  When he isn’t procrastinating schoolwork, he likes to work on his own art projects of various mediums.

Marcello Baeza (Joe, The Story about the Tattoo) is a freshman LCC. Marcello loves working in the theater, both as a technician and as an actor.

Lindsey Carrigg (Taylor in Runners Telephone, Jamie in Club Greg, Natalia in Blue Collar Anonymous, Tania Del Valle in Native Gardens, Ensemble in Theater for Social Justice) is a senior in high school and is finishing her last year as a running start student at LCC.  Lindsey's first production was as the lead Annemarie Johansen in the winter 2020 production of Number the Stars. Lindsey has returned for a yet another quarter because she continues to have great time...and because Betsy Richard is a surprisingly persuasive drama instructor.  Lindsey is the 2021 Recipient of the Outstanding Drama Student of the Year Award.

Joy L. Cowan (Graphic artist for The Story of the Tattoo, Sean in Blue Collar Anonymous, Ensemble in Theater for Social Justice) is attending Lower Columbia College to learn about drama, art, and science. She has had 4 quarters with the college's acting classes and hopes to continue to be involved in the future.  Joy appeared last year on stage in Number the Stars.  Joy is also a visual artist.  For more of her art she has an Instagram @joydrawsart.  Joy is a 2020-21 Reiniger Drama Scholarship Award Recipient.

Robert Duplessis Jr. (Mr. Hale in Trifles, Greg in Club Greg, Ephraim in Blue Collar Anonymous, Jack in Now We’re Really Getting Somewhere, Ensemble in Theater for Social Justice) is a freshman at LCC has appeared in many shows while at Rainier High School. Robert has always enjoyed theatre groups and enjoys LCC’s Drama club, even though it is not “traditional theatre” this past year!  Robert hopes you enjoy all the projects LCC’s Drama club has produced this past year and look forward to all the projects to follow when we are back in Center Stage Theatre next year! Robert is a 2020-21 Reiniger Drama Scholarship Award Recipient.

Andrew Gomes (Flight Attendant in, The Story About the Tattoo, author of Blue Collar Anonymous and prologue to The Story About the Tattoo, Ensemble for Theater for Social Justice) has been a student at LCC since Fall Quarter 2020 and is currently in the Running Start Program.  His acting history includes a few amateur skits, along with acting in LCC's Winter Quarter 2020 production, Number the Stars, playing the roles of Samuel, a Nazi soldier, and a Nazi officer. He is excited to be a part of Center Stage Theatre and is grateful for the opportunities Act One has given him by encouraging his introduction into the world of playwriting.

Ashley Jenkins (Grace in Runners Telephone, Virginia Butley in Native Gardens, Passenger in The Story About the Tattoo) is so happy to be back at Center Stage Theatre! This is Ashley’s 11th production at LCC. Most recently she was part of Sense and Sensibility, Number the Stars, and The Radio Shows that Center Stage put on last spring.  She has had a lot of fun being a part of the different productions this past year and hopes you enjoy them!

Alina Mirgorodskaya (Lynn in Runners Telephone, 2nd Camera for Club Greg and Runners Telephone, Wilma in The Story About the Tattoo, Jamie in Blue Collar Anonymous, Ensemble in Theater for Social Justice) is a past LCC student who has transferred this year to Washington State University to pursue a bachelor’s degree in Architecture. She has been part of many LCC Drama productions including two live stage performances, three radio shows, and three short films.  You might remember her as Ellen from Number the Stars or as Fanny in Sense and Sensibility. Her hobbies include painting, skateboarding, and traveling around the country in a purple van solving crimes. She thanks Betsy for an opportunity to participate in more productions and to work once again side by side with her favorite theatre nerds. She wishes everyone to stay safe and enjoy the shows!

Ariana Morvee (County Attorney Henderson in Trifles, Production Stage Manager Fall Quarter, Carol in Blue Collar Anonymous, Ensemble for Theater for Social Justice) served as Stage Manager for the first time Fall Quarter 2020 at Center Stage and has appeared as an actor in projects throughout 2020-21.   A 2017 graduate of LCC's CEO program, Ariana has been an LCC college student since Fall of 2017. Ariana has worked on shows such as A Piece of My Heart, True West, The Importance of Being Earnest, Proof, and Sense and Sensibility. In addition to her work on the set, she appeared on stage for the first time as Mrs. Sophie Rosen in Number the Stars, and then as the lead Candy Matson in LCC Drama's Spring 2020 Radio Shows. Ariana loves the community at Center Stage and is looking forward to being a part of Center Stage next year. Ariana is a 2020-21 Reiniger Drama Scholarship Award Recipient.

Francisco Santana (Voice artist for This Year As Elegy, Alex in Club Greg, Larry in Blue Collar Anonymous, Pablo Del Valle in Native Gardens, Taylor in The Story of the Tattoo, and Ensemble in Theater for Social Justice) is a student at Lower Columbia College working towards his transfer degree in acting. He has enjoyed working in film and voice over this past year.  During his free time, Francisco enjoys listening to True Crime Podcasts (especially during Autumn season) as well as spending quality time with those who mean the most to him. He hopes you all enjoy the shows and simply cannot wait to be back on stage performing in front of all of you when it is safe to do so. Casey is a 2020-21 Reiniger Drama Scholarship Award Recipient and the 2020 Recipient of the Outstanding Drama Student of the Year Award.

Katrina Shaw (Voice artist for This Year As Elegy, Sam in Blue Collar Anonymous, Jen in Now We’re Really Getting Somewhere, Stage Directions for Native Gardens, and Ensemble for Theater for Social Justice) is a newly turned fanatic for the delightfully exciting art of theater. Ever since her first foray into acting in Fall Quarter 2019, taking the part of Lucy Steele and Sir John in the play Sense and Sensibility, acting has awakened an eager passion and appreciation for the craft. Katrina is graduating from LCC transferring to Brigham Young University where she aims to pursue a major in Theater Art Studies.

Elizabeth (Eli) Stol (Elaine in Now We're Really Getting Somewhere) participated in her first formal production and official acting outside of class. Eli fell in love with theatre when her Mom first took her to see the stage addition of A Christmas Carol at the age of 6 years old. Since then, she has seen every play she could. Last year, Eli took an acting class with Betsy Richard, and fell in love all over again. She says that working on this production has been "A dream come true" and is looking eagerly forward to working with theatre more in the future.

Center Stage Theatre in the Rose Center for the Arts is home to a variety of plays put on by Lower Columbia College students, community members, and visiting performers.

Enjoy live performances in an intimate theatre designed to enhance your connection with the performance.

About the Drama Program

Drama courses provide students with an understanding of the theatre and an appreciation of theatre, acting, technical theatre, and production experience through performance. Students develop the ability to express themselves in many ways: acting on stage, seminar discussion, play analysis, review writing, script interpretation, kinesthetic expression, and technical proficiency in set, costume, and light design.

Students interested in acting can complete an associate degree or begin studies to transfer to a baccalaureate program. Drama courses can also be an important supplement for those who plan to major in the humanities or social sciences.