2013 Alumni of the Year: Paul Laufman

Paul Laufman honored as LCC's 2013 Alumni of the Year.

Paul was raised in the Longview school system where he attended both R.A. Long High School and LCC. He focused on math and science and participated in athletics, including as a High School All-District Baseball selectee.

Upon receiving his Associates Degree in Engineering from LCC, he attended Washington State University (WSU), receiving a Bachelor's Degree in Mechanical Engineering in 1961. With subsequent study in the Master of Science in Systems Management Program at the University of Southern California, he entered a career in Rocket Propulsion with major aerospace enterprises, including Hercules, Lockheed, and Aerojet-General Corporations.

As a development engineer, Mr. Laufman produced a number of patent disclosures. An early participant in U.S. space programs, he was a project engineer and executive in the development of propulsion systems for major defense and manned space systems, including the Apollo Moon Landing and the Space Shuttle Programs.

In 1995, Mr. Laufman co-founded United Paradyne Corporation, which became the exclusive propellants and pressurants contractor for all space missions containing government assets, including the Space Shuttle, and for many commercial satellite launches worldwide.

Paul retired as Chairman/CEO of United Paradyne Corporation in 2004 and currently serves on its Board of Directors. He is married to the former Marlene Worley of Kelso and they reside in Grass Valley, California.

Paul credits this community's exceptional educational experience as foundational in obtaining his WSU degree and for success in those endeavors for which he has been recognized.

The Laufman Lecture Hall, 100-seat, state-of-the-art lecture hall in LCC's new Health & Science Buildin has been named in his honor. 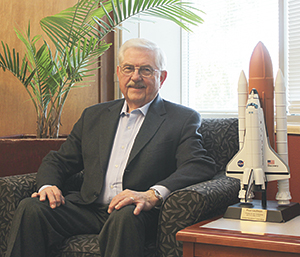