2014 Alumni of the Year: Rob Quoidbach

He accepted the award at the Annual Foundation Horns & Halos Gala in April 2014.

Rob was born in Longview in 1925 and his family has deep roots in the community, and at LCC in particular, as his mother helped fundraise to start the college (which was then called LC Junior College), and was the author/composer of the college's fight song.

Rob started his college education at LCJC when he was just 17 and then transferred to Stanford to pursue a degree in engineering.

Upon returning to Longview he worked as a local building contractor, constructing and remodeling some of the buildings that stand on LCC's campus today, including the old Science building and the Main building. He also became an avid tree farmer, and worked with fellow LCC Alum Sid Snyder as a founding director of Columbia Bank.

Rob is known for his passion for helping others and his dedication to LCC has been life changing for so many students and faculty. Throughout the years, Rob has supported faculty development grants, annual and endowed scholarships, and supported various capital campaigns. He has also provided for LCC in the future through his estate planning, ensuring his legacy of support continues.

When asked why he gives so generously to the community Rob said,

“I think we make our heaven on Earth.” 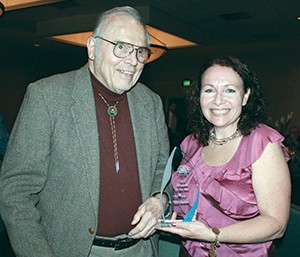 LCC Board of Trustees Chair Heidi Heywood presents Alumni of the Year award to Rob Quoidbach.